The Chefs Behind Toronto's Most Popular Food Trucks 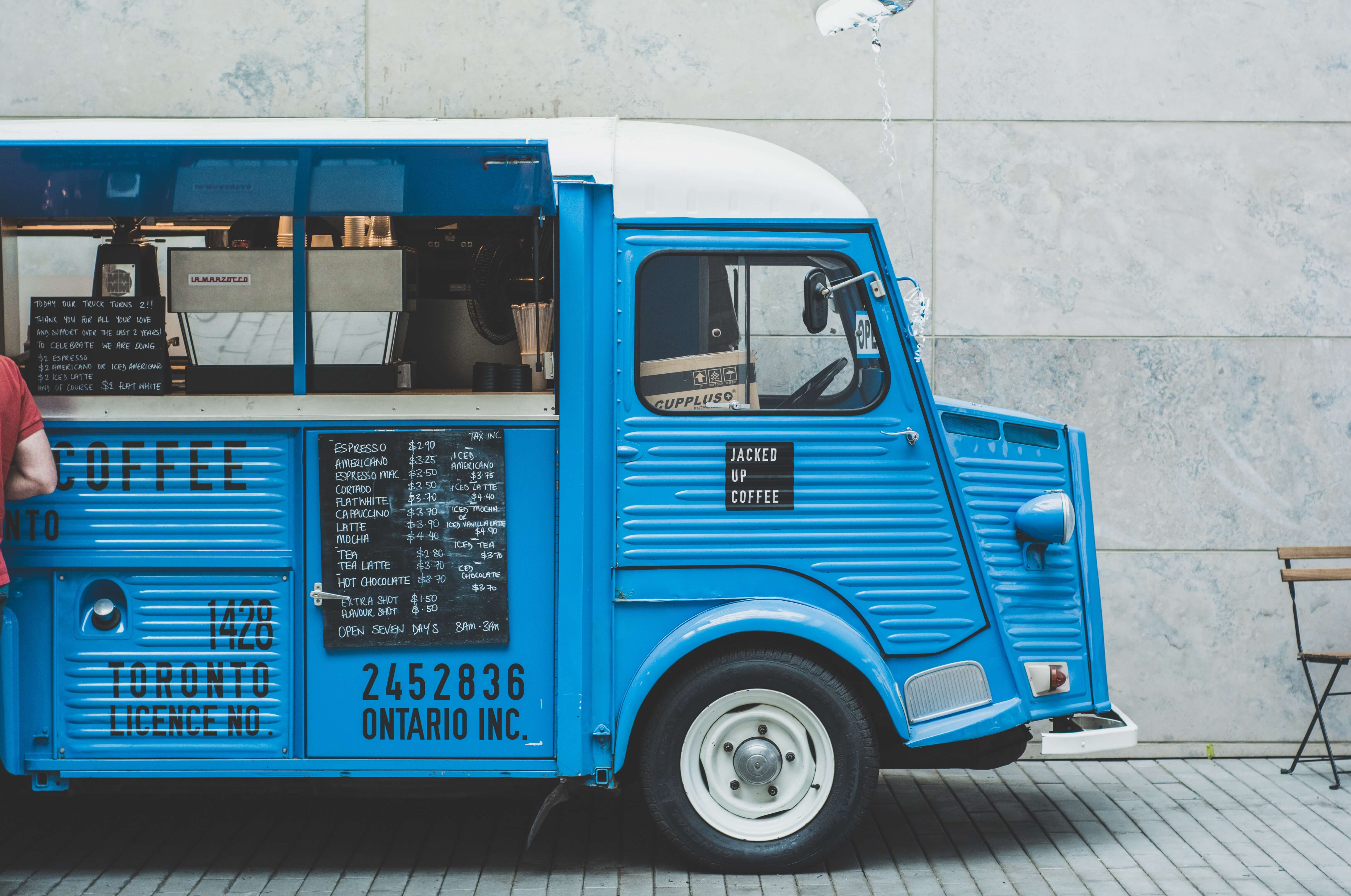 The food truck trend shows no signs of slowing down!

While the restaurant industry has experienced steady growth (about 2% per year) over the last few years, food trucks grew 7.9 percent annually from 2012 to 2017. While those numbers are telling, you only need to head downtown in any major city to see that food trucks are still thriving in 2019.

In Toronto, that is very much the case. Toronto is home to mobile kitchens that sling everything from brunch and tacos to seafood and cupcakes. Just about any cuisine imaginable can now be had from the side of a truck.

As more and more trucks join Toronto’s mobile food scene, we set out to get to know the chefs behind some of our favorite food trucks currently on the streets of the T.O.

Here are some of Toronto’s most popular food trucks — and we're introducing you to the Chefs who make them so great.

Amanda and Kevin are both Toronto natives who traveled the world eating at food trucks in other cities. That experience convinced them to quit their corporate jobs and start a truck of their own, selling stuffed chicken wings and other comfort foods from curbside locations during lunchtime in Toronto.

“We just fell in love with the scene and the lifestyle,” Amanda said in an interview. “There is so much room for creativity to create fun dishes. After seeing the food truck scene become more popular in Toronto we had to give it a shot!”

Today, Justin uses Eva’s recipe for chimney cakes as the base for the sugary pastry cone he serves from his truck, Eva’s Original Chimneys.

Justin and his wife, Kristen, also offer their own spin on the traditional treat: They fill the cakes with soft serve ice cream and a wide array of homemade toppings. The result is a delicious sweet treat that is now offered in several brick and mortar stores in addition to the truck, which is bookable for private events.

Curbside Bliss is what happens when two huge food trends meet: A mobile cupcake shop, serving up delicious desserts all over the city.

Chef Cynthia Pacheco was just a hobby baker until a cake-decorating course inspired her to quit her corporate advertising job and look for a career that was more fulfilling.

As a busy mom, she landed a spot working part-time at a bakery, where her passion only continued to grow.The excitement she saw on people’s faces when an ice cream truck approached inspired her to move forward.

“I thought, wouldn’t that be awesome, to bring something from a truck to people and have them walk away and be so happy?” she said. “The ice cream truck drives around and brings people bliss. I wanted that.” The result? Roadside cupcakes, AKA bliss.

Chef Daniel Selvaggi has an impressive resume of educational and culinary achievements, and his food truck venture is sure to shake up the scene.

“Pronto would like to set a new standard and image for food trucks in Canada,” he wrote on his website, which also promises to always use the best and freshest ingredients and top-tier culinary techniques to prepare the dishes guests get from the Pronto truck.

Now, Selvaggi and Pronto Pasta can be found around the GTA and at city and private events year-round.

Chef Ami DePasquale worked in a number of Toronto restaurant kitchens, but knew her dream was to run her own. That dream became a reality when she met Steffen Marin, chef and owner of the Heirloom food truck.

“After meeting Steffen, I quit my job and dropped it all to join him in his vision of promoting local and artisanal cuisine from his food truck,” she said. “Steffen’s vision soon became my own vision. We worked together to revamp his menu and make a name for the food truck. Together, we were getting attention with our food, and our love and passion for feeding our customers.”

In 2016, Ami became co-owner of the truck, which you can find at summer and winter markets and private events all over Toronto. Visit the Heirloom Toronto Website to check out booking & their truck schedule for each year!

Chef Adrian Niman is a Torontonian, born and raised. He’s worked in the city’s food scene all of his adult life, first with a successful catering business that then funded his passion projects, including the Food Dudes truck.

“I realized very quickly that the food culture in Toronto was booming and we were just hitting the cusp of where we are now,” he said. “Look at where we are now. There’s just so many restaurants to go to eat. I think it’s because of how diverse we are, you can and have an authentic Italian meal and then go to Italy and eat and I like that place in Toronto more. It’s just as authentic because Italian’s live here, Greeks live here. You can say the same about Korean food, Chinese food, Japanese food, Mexican food and that’s what I love most about Toronto, why I ended up getting into the industry, because the sky is the limit.”

Chef Randy Kangal hails from the Trinidad and Tobago town of Curepe, where he says doubles were born. His experience with Caribbean flavors helped him start one of the first food trucks in Toronto to serve up things like goat roti, doubles and spicy curries.

Chef Jenn Burko was a home baker and cake designer who dreamed of owning her own restaurant. A food truck was her ticket to break into the industry.

At the Bake Three Fifty truck, you could get cupcakes and ice cream sandwiches customized to your liking with toppings like candy and cereal. Those offerings now also include customizable milkshakes.

Chef Matt Basile wanted a career that he was passionate about, which is why he left his job and started Fidel Gastro’s, a hospitality company with a food truck, brick and mortar restaurant and catering business. But the food truck came first, and it’s the part of the business many Toronto foodies recognize.

“I started Fidel Gastro's because I wanted to get into food, and I wanted to do it my way,” Matt said. “I didn’t want to work as a line cook in someone else’s kitchen – I wanted to be an entrepreneur in the food industry, and starting with a food truck was my way in.”

The truck is the latest of Tom Antonarakis’ ventures, and his third seafood spot in the city of Toronto!

Chef Toben Kochman was classically trained at Cordon Bleu School of Culinary Arts in Paris before he brought his skill to Toronto. A veteran of some of the city’s top French spots, he now serves up his own creations at Toben Food by Design, his catering and full-service events company.

“I grew up in a family where cooking and food were major focal points. I used to cook with my Grandmother and Mom at many holiday dinners and special meals,” he said. “When I was a teenager I started working in restaurants, washing dishes and making pizza. It was an immediate love affair with the energy and passion that was present in professional kitchens.”

The Pappas family has been in the restaurant industry since the 1960s, but the food truck is the brainchild of the younger set of Pappases: Chefs Costa, John and Chris

They bring their family’s classic Greek recipes, including pitas, fries, salads, soups, desserts and more, to Toronto’s streets, and Pappas Greek on Wheels has quickly become a favorite on the city’s food truck scene.

Chef Tom Januszewski had more than 15 years of experience cooking for Toronto’s top hotel chains before he decided to set out on his own. He launched the T.O.’s first gourmet breakfast truck, and it’s been an egg-citing hit.

The Egg Man truck can be spotted all over the streets of Toronto, serving up fresh, hearty breakfast dishes, including a popular breakfast poutine. Chef Tom is giving Torontonians the best way to start the day.

While the food truck scenes continue to grow in cities across the globe, these chefs are likely to inspire the next class of mobile cooks that will serve up our favorite T.O. dishes.

Until then, catch these cooks on the streets for some of the city’s best eats!